Lightning Network naysayers had to take a seat this week after South America’s largest crypto exchange, Buda, announced the integration of the second layer protocol into their platform. The exchange operates in some major markets in Latin America including Chile, Peru, Argentina, and Columbia.

The Santiago-based platform provides access to a number of other crypto-related products in addition to their exchange. South American Lightning Network users can now access a plethora of new services through Buda. These platforms include Bitrefill, Bitlaunch, LNSMS, Coinmail, and JoltFun.

News of the integration came via a blog post on Buda’s website and social media accounts. The company blog post explained that the Lightning Network is a new way to pay for services using Bitcoin. The post also listed what services users could now enjoy thanks to the integration. Following the list of services, the post cautions users about the Beta testing status of the Lightning Network.

Satoshis Place, Satoshi Tweet, and Yalls are listed as acceptable testing grounds for users looking to get their Lightning Network experience up. Satoshi’s place, in particular, was one of the first Lightning Network Apps (Lapps) to enter the market. Users can purchase blocks on a digital whiteboard for one Satoshi per block. Ironically, the board briefly became a battleground for the ongoing Bitcoin Cash vs Bitcoin debate. 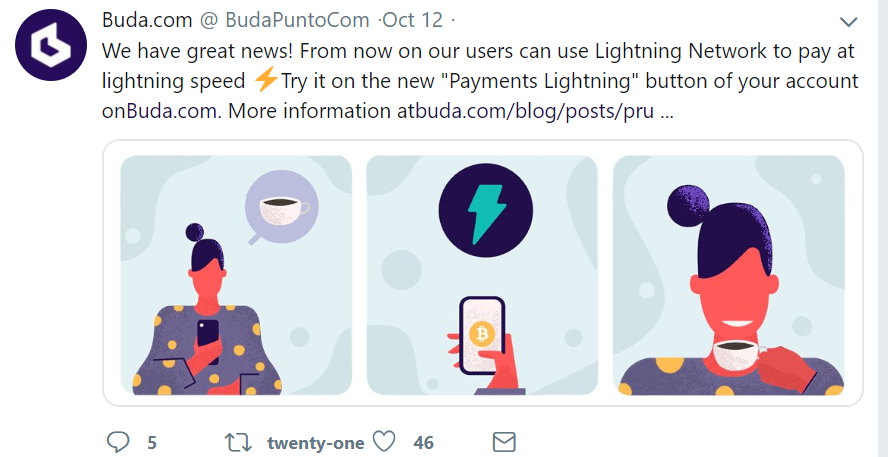 Buda entered the market in 2015 with the goal of providing more security and easier access to the South American cryptomarket. The crypto exchange underwent troubles in June of this year after Columbian banks shut down all of the company’s accounts. Luckily, Buda developers were familiar with this sort of scenario after dealing with the same situation in Chile a month earlier. In April 2018, the exchange won a court case in Chile that resulted in the banks reopening accounts they had closed earlier in the year.

South America continues to see increased cryptocurrency adoption. Many citizens turned towards crypto in response to the crushing inflation brought on by a combination of corruption and sanctions. Countries such as Venezuela saw their national currency lose most of its value this year. In response, cryptocurrencies such as Bitcoin and Dash became a viable option for citizens looking to protect their wealth.

What is the Liquid Network Sidechain?

Bitcoin Lightning Torch 2.0 On The Move