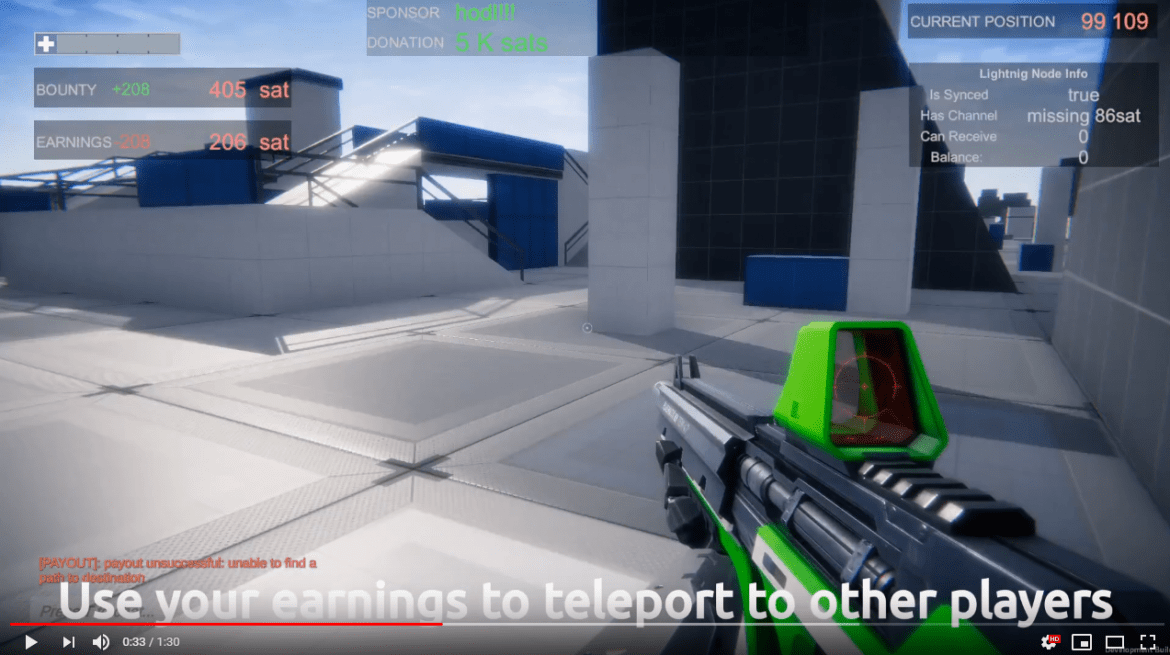 As the remarkable functionality of the Lightning Network continues to expand, there is a strong push to integrate cryptocurrencies into the gaming industry. This month, another LN-powered first-person shooter (FPS) by the name of Bitcoin Bounty Hunt hit the digital shelves for all to enjoy. The news showcases further use cases for the second layer protocol, as well as, a chance for gaming to become even more profitable in the very near future.

The Bitcoin Bounty Hunt game is your traditional first-person shooter with a crypto twist. The platform utilizes Lightning Network micropayments to reward players for their advancements in the game. Players can select their players and arena.

Similar to many FPS titles, players battle in an online arena. Here they can collect bounties and earn Bitcoin by gathering Satoshi Cubes. Players can also stack some sats by killing other players in the arena. Satoshis can be converted into actual Satoshis and withdrawn after a certain amount of time. Additionally, players can use their hard-earned crypto to teleport across the board and earn more.

The developer collective behind the project, Donnerlab, wanted to create a streamlined gaming experience that allows users to effortlessly utilize their earnings. As part of the team’s strategy, they incorporated the hugely popular Neutrino wallet. This wallet accepts both traditional and Bitcoin Lightning Network payments directly.

The game features a few other forms of monetization to help buffer development costs. For example, there are numerous in-game advertisements that display during your battles. Also, Ad-Hodl Auctions are plentiful in the game.

Lightning Network Gaming on the Rise

Donnerlab isn’t alone on their quest to make gaming profitable. Already numerous Lighting Network FPSs exist. Notably, none of these games come close to the high-end console FPSs such as Call of Duty or Battlefield quite yet, but they are the perfect example of how the industry is preparing to adapt to the Web 3.0 revolution.

Already, platforms such as Satoshi’s Games offer a variety of shoot-’em-ups to keep you entertained for weeks. One of the most popular titles on the platform is Lightnite. Like Bitcoin Bounty Hunter, the platform uses the Lightning Network’s microtransaction capabilities throughout the game.  Players can earn bitcoin whenever they shoot other players in the battle arena.

However, this title takes the battle one step further, as players lose their precious Bitcoin when they get shot. Another cool feature in this title is the ability to throw auctions to sell various items discovered in the game. Unlike Bitcoin Bounty Hunter, this title allows users to withdraw their sats instantly.

You may be surprised to learn that some of the top gaming firms such as Ubisoft, Microsoft, and Sony, already have crypto integrated games in the pipeline. Of these major game developers, the French-based publisher Ubisoft leads the pack in terms of platform development. Already, Ubisoft has a partnership with the game distribution platform Ultra. Ubisoft seeks to integrate Ultra’s UOS blockchain during a trial period on a test version of its network in the coming weeks.

The Future of Gaming

You can expect to see even more get-paid-to-play titles spring up in the next few weeks. Developers are keen on taking the gaming experience to the next level, and the Lightning Network helps to bridge the gap into the crypto realm. For now, you can stack some sats and enjoy some online FPS fun.

The LIT Box and How it Will Make...